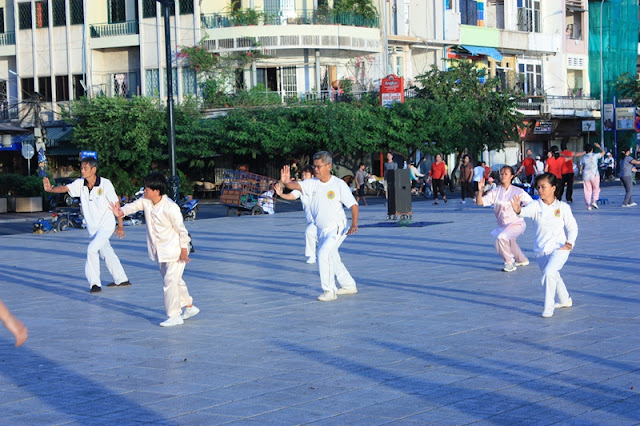 It was so great to see Cambodia’s capital Phnom Penh looking so lush, green, shiny and happy when we dropped in a few weeks ago. On our first morning (after waking for the day at 3am…ahem) we made our way down to the riverfront at dawn to be greeted with tai chi classes, dancing (dancercise?!) and joggers on the newly paved, landscaped and exercise equipment-bedecked public space fronting the swollen Tonle Sap river. 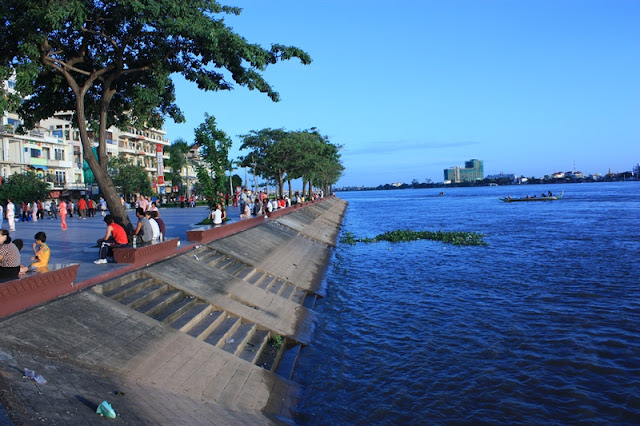 Beautiful morning on the full and fast flowing Tonle Sap

It was a happy sight and a far cry from the riverfront of old. In 2007 (in Phnom Penh years 2007 is really old news) I would return home filthy from early morning walks along the unpaved dirt, after dodging rubbish piles and bedraggled kids. In 2008/09 we’d weave in and out of the jumble of parked motorbikes on the footpath as the riverfront was cordoned off with a big billboard covered fence for maintenance. Finally, it’s been restored to a beautiful, practical and clean space Phnom Penh-ites can enjoy.

Riverfront makeover aside, the city looked newer, glossier, shinier – there were new businesses everywhere from cool new eating and drinking establishments (Brown, Yumi, Rahu et al) to the not so cool but inevitable encroachment of a KFC on what seemed like every block. The streets surrounding the Russian Market were almost unrecognisable, with a rash of new clothing stores cashing in on the brand name western clothing made in the city’s garment factories. The Central Market’s multi-million dollar renovation project is complete, and many existing businesses have expanded, been renovated, or opened multiple branches. 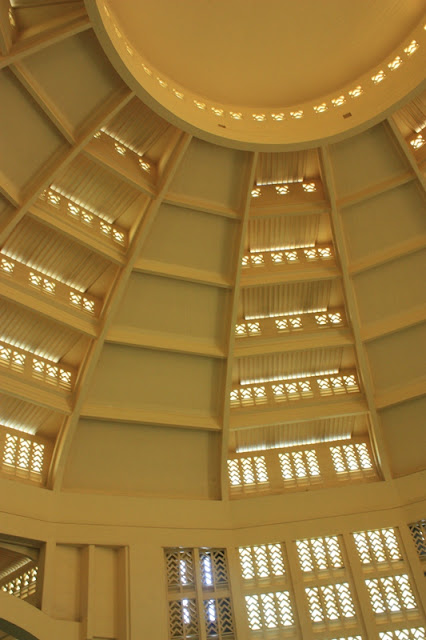 Inside the revamped Central Market

My old street (108) has new green spaces and far less rubbish. There are no longer homeless families literally living on my old doorstep. It’s so amazing and heartening to see Phnom Penh rise from the crumbling, poverty stricken, dangerous place of old to a thriving, creative, constantly improving mini-metropolis, still with loads of charm and a dose of edginess for good measure. I think I will always feel some kind of pull to Phnom Penh after spending a few years living there – an intense period of change, new experiences and new life direction for me.

This Bangkok Post piece is a great read on the new face of Phnom Penh but raises interesting points about the dark side of rapid change, like forced evictions. It will definitely be interesting to keep an eye on how the city continues to evolve.