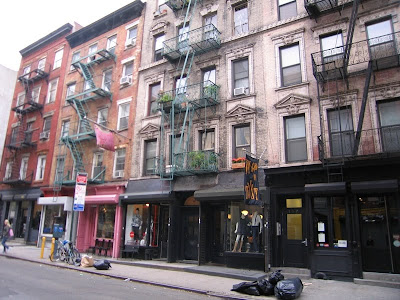 The Lower East Side is another New York neighbourhood we really loved, so much so that we spent several afternoons and nights sampling its cool bars and great eats. The LES is a grungy yet gentrifying area (noticing a theme here?!) that was the first home of many Jewish settlers in New York and went on to house many other immigrant communities in densely populated tenement housing. These days it still seems to have a bit of an edge and has a thriving bar and restaurant scene, with vibrant Ludlow Street the centre of the action.
Where we drank
Schillers – a gorgeous, atmospheric bar by the owner of Balthazar (in Soho) and Pastis (in the Meatpacking District), with a vintage European style and great cocktails. And a quirky bathroom with a communal, retro sink that seemed to be a drawcard for some nosy drop-ins!
Los Feliz (Tequileria & Taqueria) – moody, dark and mirrored with a tequila and margarita menu as long as your arm – we loved sitting at the bar talking (and drinking) tequila at this decadent looking place. Their jalapeno-infused tequila was amazing!
Spitzer’s Corner – a cool, rowdy bar with craft beers, satisfying pub food and long tables crammed with cool college kids. Here we were strangely asked for ID, which they then scanned with a machine (hello paranoia, we’re 31!) but then noticed everyone else was being asked too. NYC bars can be really strict and we’re glad we took our passports with us after an earlier scare at DBA in the East Village (we managed to talk our way in despite being ID-less, luckily!)
Allen & Delancey – an upmarket gothic/chic bar that was perhaps my favourite of the whole trip. Here we sat by the front window having extra-dirty martinis pre-dinner at Little Giant and wishing we lived in New York.
Where we ate
Katz’s Deli – “I’ll have what she’s having!” Katz’s is the famous Jewish deli where ‘that’ scene in When Harry Met Sally was filmed. This wasn’t somewhere initially on our radar, but when we stumbled across it decided to give it a try, especially given we’d never eaten Jewish deli food before. Sampled – a hard salami sandwich that was about 20cm high (slice upon slice of meat stacked up high – pretty disgusting actually!), a yummier potato knish (like a big mashed potato patty, fried) and matzo ball soup – a silky, delicate, doughy dumpling in a comforting broth. Katz’s has been going since 1888 and is something of a New York institution. I’d go back for the soup but skip the salami! 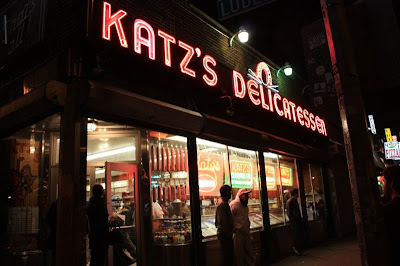 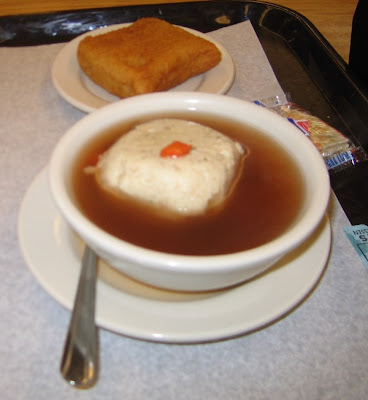 Sugar Sweet Sunshine – Years after Magnolia Bakery appeared in SATC sparking a cupcake eating frenzy, the trend refuses to die. We spotted many cupcakeries while out and about in the city and sampled several, only to be disheartened at the sickly sweetness of them all (which is saying something, coming from a dessert devotee). I think it’s something to do with the fact the icing (or frosting) is equally as high as the cake part rather than thinly spread over the cake like the old school Australian kind. At Sugar Sweet Sunshine we tried the red velvet, pistachio, lemon and ‘Ooey Gooey’ – chocolate with almond buttercream (the lemon was the best). I really wanted to like these but I think the reality didn’t live up to the less cloying cupcakes of my imagination. 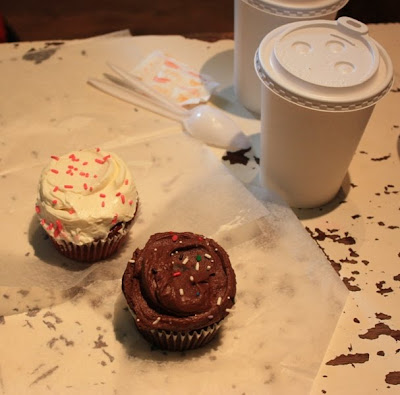 Little Giant – a ‘seasonal American’ restaurant that was one of our best New York eats. Cosy and unpretentious, Little Giant embodies the slow food ideal that has taken hold of the NYC food scene, where locally grown, seasonal, and preferably organic produce is used. I had the mushroom and cauliflower with poached egg and truffle oil to start (heavenly) followed by sea scallops with grapes, cauliflower puree and hazelnuts. We shared some sides like a gourmet version of mac and cheese (now I understand American’s fascination with this dish – though I still think I only like the gourmet version!) and three desserts between four of us – meyer lemon fritters, sticky toffee pudding and a chocolate mint sundae. I highly, highly, highly recommend Little Giant if you’re in NYC! 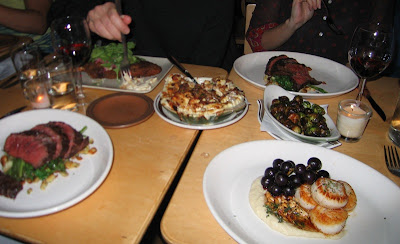