Travel ideas website Tripbase have initiated a travel secrets project, where bloggers reveal their best kept travel secrets then tag some fellow bloggers to do the same, with the results to be featured in an upcoming e-book. I was tagged by Cate from Caffeinated Traveller to take part, so here’s my contribution. I’ve decided to base it on the sometimes underrated Cambodian capital (and my former home of 2 and a half years!) Phnom Penh…
Phnom Penh – more than just girlie bars and gunfights!
Dusty, friendly, charming Phnom Penh is often overshadowed by tourist drawcard Siem Reap, with some tourists skipping the capital altogether in favour of non-stop temple exploration at Angkor Wat. Yes, Siem Reap is a fantastic place to visit, but Phnom Penh shouldn’t be forgotten! With its cliched reputation as a somewhat dangerous city where the Killing Fields and Toul Sleng genocide museum rate highly on most visitors’ must-see lists, its more cosmopolitan aspects are a revelation to those not already in the Phnom Penh know. And it offers some of the best bargains in Asia, or perhaps anywhere!! Here are but a few good things about ‘the Penh’: 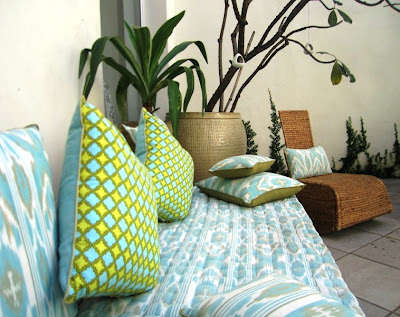 Street 240’s Bliss (by name and by nature)
1. Handmade, homemade, unique shopping
A combination of factors make Phnom Penh a perfect place for some serious retail therapy. Firstly, Cambodian silk from nearby towns and villages like Takeo feature heavily in the city’s many tiny boutiques. The silk is of high quality and great value for money, with some places (like Sentosa Silk and Tabitha) selling rough or smooth varieties in a rainbow of colours for US$8-10 a metre. Cushions, bedspreads, bags and clothing made of Cambodian silk are all fantastic and unique buys. 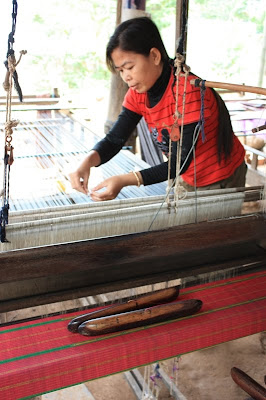 A silk weaver at work at the aptly named ‘Silk Island’ just outside Phnom Penh
The proliferation of NGOs in the city who engage Cambodia’s needy with crafty pursuits means there are lots of unique, handmade items for sale, like wallets and bags made of recycled rice bags, handsewn soft toys for children and all things rattan for very low prices. Then there’s the influx of talented foreigners who have set up shop in the capital, resulting in some gorgeous boutiques combining European style with Cambodian artistry. Street 240 is the place to head (especially clothing and homeware store Bliss, which also houses a spa, and Waterlily for creative handmade jewellery). I could go on and on, but you’ll have to explore for yourself!!
2. Fragrant, coveted Cambodian pepper
Pepper grown in Cambodia’s south (predominantly the charming, crumbling, riverside town of Kampot) is highly fragrant and an integral part of Cambodian cuisine. In French colonial days it was highly coveted by French chefs, and graced the menus of top Paris restaurants. A resurgence of the pepper industry in recent years means Phnom Penhites are spoiled with some of the finest pepper in the world at their gastronomic disposal. The pepper is sold all over the city in souvenir-ey type shops, but for a only a few dollars you can pick up a bag of Cambodian peppercorns (organic, no less!) from Lucky or Pencil Supermarkets. 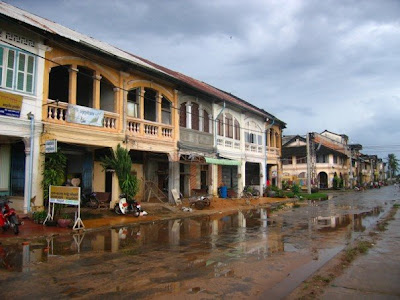 Charming Kampot – Cambodian pepper HQ
3. Ridiculously cheap alcohol
Thanks to Cambodia’s laxness with tax and penchant for all kinds of shady cross-border trade, alcohol is exceedingly cheap. Most bars will pass on the savings (think cocktails for around US$3-4 and beers from $1!) but the real bargains are to be found in the city’s supermarkets (with especially good selections at Thai Huot, Bayon and Pencil). Basic spirits like Stolichnya and Absolut vodka can be found from US$6-9, Bailey’s for US$11-12 and Grand Marnier for US$16, with everything else somewhere in between. It’s a recipe for disaster for some off the rails expats, but really, who’s complaining?!
Now for the tagging part… I’m nominating the following bloggers to share their travel secrets too:
1. Charlie from Bali Beach Bunny
2. Marie from Shantiwallah
3. Vivian from Lost in Translation