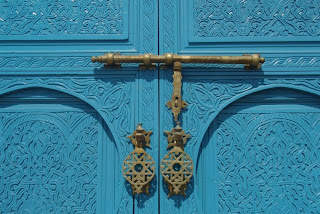 In search of something delicious, inspiring and new for Sunday lunch, we ventured to a recently opened Moroccan-themed eatery called Casbah in Saigon’s District 1 (59 Nguyen Du Street – the last right turn off Dong Khoi before the cathedral).
Upon arrival it seemed to check all the right boxes – cool, hidden entryway down a little laneway, cute Moroccan decor (though it’s obviously trying to emulate the more authentic and upscale Warda), different nooks and crannies divided by beaded curtains and Arabesque window cut-outs in which to lounge… however the menu seemed a little suss with its bizarre mix of Asian dishes and Middle Eastern ones.
We should have taken this as a sign the food would be less than inspiring.  We ordered hommus with bread, falafel and tabouli – the hommus was basically a too-small amount of the dip smeared on a plate with a few triangles of bread. The tabouli was actually couscous with a bit of parsley and a few other things mixed through it – not tabouli at all. The falafels were a little better, though came with a dip that tasted just like mayonnaise mixed with chilli sauce, kind of like a spicy version of thousand island dressing.
The food was a major letdown, but the space is really cute and I would go back for a drink instead. Perhaps it’s better viewed as a loungey bar.
So…still hungry and unsatisfied we thought we’d try a cheap Vietnamese place back down on street level called Banh Cuon LA – a chain restaurant in the style of a Pho 24 or Wrap & Roll (which I love – have been going to the branch on Hai Ba Trung alot!) – but specialising in rice paper rolls.
We had the cha gio (prawn and crab spring rolls, fried) and rice paper rolls containing shredded pork, which actually turned out to be some kind of pork sausage instead. The flavour was ok but the rolls were quite greasy, and the cha gio were nowhere near as nice as they are elsewhere.
Refusing to accept that two mediocre lunches would suffice we thought we’d head to Au Parc in search of dessert. Finally – a winner! Au Parc is a favourite already (it seems like Saigon’s version of our favourite Phnom Penh cafe – The Shop), with its colonial shophouse setting, good western cafe fare and importantly, excellent desserts! We had the Chocolate Nemisis Cake – cool name, brilliant cake – almost like chocolate fudge. The perfect cure for my ‘disappointing food experiences/can’t find a good place to rent/the ATM swallowed my card/I’m living in a little hotel room/I don’t know where anything is/I feel lost’ Saigon blues!
Image courtesy Nick Leonard