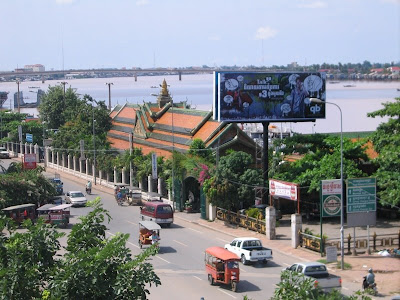 After recently moving to Saigon after 2+ years in Phnom Penh, I’m now being asked what the differences are between life in the two cities. This got me thinking – what are the pros and cons to living in each? And which is the better place to live? Having only been in Saigon a couple of months I don’t have a full understanding of how this city ticks, so my observations may change after living here a little longer. But for now, these are the main differences I’ve encountered:
Size
Phnom Penh is like a big country town and Saigon, an Asian NYC! In Phnom Penh (let’s just call it PP) everything is close, there’s no ‘commute’ as such, and five minutes after leaving home you’re at your bar/restaurant/shop/market/friend’s house of choice. Assuming you don’t live in Toul Kork or over the Japanese Bridge, that is! Meanwhile in Saigon, the crazy traffic and vast distances mean you can sit in a taxi forever just trying to get from A to B. Which brings me to my next point…
Transport
After grappling with motos and tuk-tuks in PP (and having to bargain each and every time – it gets so old), Saigon has a refreshing alternative – metered taxis! Not only is an air-conditioned taxi much more comfortable than a breezy, bumpy tuk-tuk (the fun factor dries up after the first few rides) but I no longer have to deal with the bargaining issue. And unlike Thailand, you don’t have drivers who try and get out of turning the meter on.
People
There are marked differences between Cambodian and Vietnamese people, but not wishing to offend I’m not going to go there. Instead, let’s talk expats. In PP it seems easier to meet people. Just go to a first Friday party at Elsewhere or prop up the bar at Rubies and you’re bound to form some fast and firm friendships after not too long. In Saigon, though, the sheer number of bars and expat hangouts means the scene seems more disjointed than PP’s. Where to even begin?! There are also a lot more NGO workers, creative souls and wandering hippy types in PP, while Saigon seems to attract a more professional, business -minded breed of expat. Not necessarily a bad thing, but it also changes the vibe of the cafes and bars. Saigon’s don’t have as casual a feel as PP’s.
Food & Drink
Both cities are excellent ‘food’ places. Vietnam’s sheer number of options are overwhelming and there’s much better street food here in Saigon, but PP has some truly excellent cafes and restaurants (that I miss!). More Saigon sampling is required before I can really compare the two!
Housing
Both cities are over-priced (in my opinion) – rents can be similar (or more) to those in Sydney, which doesn’t really make sense. In both places it can be hard to find a place that’s not badly designed or ridiculously tacky (think ugly patterned tiles, even uglier chandeliers, kitchens with no windows…). In Saigon there are lots of tall skinny houses that sound great in theory (5 bedrooms! 5 bathrooms!) but may also have 5 levels of steep stairs to contend with and again, no windows in the kitchens or bathrooms. I’ve come to a compromise with the bathrooms (both ours are windowless) but now have a kitchen with lots of bright natural light flooding in via a room length window – yay!
I could go on and on…but basically, Saigon wins in terms of transport (but I wish there was also a subway) and street food, while it’s a tie for other food and housing. And PP wins for people (for now!) and size – although I usually love large cities so perhaps Saigon’s size will grow on me. I think I’ve been spoilt (or become really lazy) living in a smaller place where things are easier to find and get to. At least the two cities are close enough that I can visit PP when I get too homesick for all my old favourite haunts!