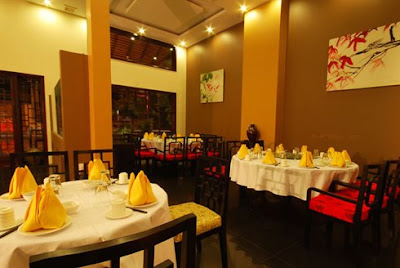 On the weekend I tried out the dim sum at the newly opened Yi Sang restaurant at Almond Hotel, another Luu Meng venture (the guy behind Malis, Topaz, Cafe Sentiment and more). Compared to the city’s only other dim sum restaurant (that I know of, and not counting the InterCon) – Sam Doo – the restaurant looked more like a ‘real’ dim sum place yet sadly, minus the trolleys.

The dishes were really cheap (between US$2 and US$3 a basket) and the barbeque pork buns and prawn dumplings definitely hit the spot. Unfortunately though a few things we tried to order (like the barbeque pork in rice noodle rolls) were greeted with the dreaded ‘no have’. We also ordered some sesame balls which strangely didn’t appear though the waitress kept saying they were five minutes away. In the end we just cancelled them.

With the bill for seven of us working out at less than US$6 a head for a dim sum feast and copious amounts of Chinese green tea in a clean, spanking new setting, it now makes me question why we spend so much more in some of Phnom Penh’s grottier old Chinese diners!